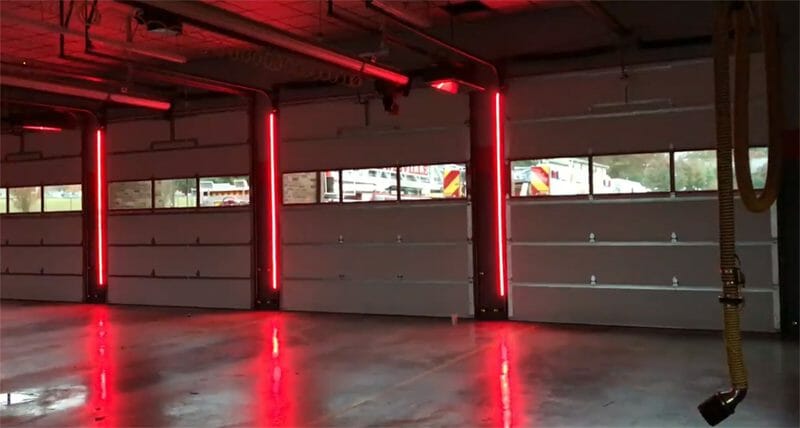 Written by Protect America and published on https://www.protectamerica.com/.

Businesses and organizations that rely on commercial garage doors often use large commercial vehicles that are difficult to navigate. For that reason, additional safety measures help get these large vehicles in and out of garages without damage to the vehicles or commercial garage doors. Imagine sitting in the driver’s seat of an enormous fire truck. You’re expected to reverse the vehicle out of a large garage without damaging the vehicle or the door. These safety lights make your job much easier. The LED lights are solid red while the garage doors are fully closed. When the garage door is being raised, the lights flash red so that it’s clear the door is in operation. Then, once the garage doors are fully open, the lights become solid green.

Blinking sensors on a garage door usually aren’t a good thing, because they’re often coupled with the garage door not working the way it should.  Whether it won’t open, won’t close, or only responds intermittently, there’s a lot of frustration in a garage door that just won’t do what it should. You might also experience your garage door opener not working, which can be a huge inconvenience. A lot of homeowners who have these kinds of garage doors also have home automation and a security system that is tied to everything, but fixing a blinking sensor on a garage door is often not related to the other parts of the system. That can make it easier to correct — as long as the homeowner has some patience to troubleshoot the issues that could be causing the malfunction.

Fixing an Issue Quickly Is Important

Among the easiest issues to solve are objects blocking the sensor beam. Because garage door sensors rely on infrared technology to “see” if something is in the way of the door’s operational path, that path needs to be unobstructed.

Even a spider building a thick web near a sensor can cause that sensor to read that something is in the way. The same is true with an object left under where the garage door would close, or even large leaves or other debris that can block the sensor. By clearing away anything that could potentially be blocking the sensors’ ability to see one another along a solid infrared beam, a homeowner has the potential to quickly fix the issue at hand.

But what if that doesn’t work? Well, other things can be tried. With a security system that’s tied to the garage door sensors, other issues throughout the system could also cause a problem.

A Red Sensor Indicates a Problem

Red sensor lights are an issue because they should generally be green. And when they’re blinking they’re flashing a warning to the homeowner that something needs to be corrected. If getting debris away from the door makes no difference, then there’s more to the story. At that point a homeowner may want to try:

It’s not always easy to be sure what’s causing a sensor issue, but there are many ways a homeowner can try to fix the problem themselves. If nothing they can do works, then it may be time to call in the security company or home automation company that installed the sensors, so they can get a professional opinion on what’s wrong and what can be done next. That can go a long way toward fixing any blinking red light on a garage door sensor, making it easier for a homeowner to have a working garage door once again.

Does your garage door sensor have a yellow light that’s making you worry? Perhaps you fear the sensor might be low on batteries, or worse, nearing the end of its lifespan.

The good news is, yellow light is your garage door sensor’s descending line. Therefore, this yellow light should always be glowing. So there’s no need to panic if you see the yellow light. The light means your sensor is transmitting infrared beams to the receiving sensor, otherwise known as your green light.

How a Security Company Can Help

When homeowners have their garage sensors, home automation, and security system linked up, it’s possible that the security company can help them fix even simple issues. It’s worth working with a company that’s focused on customer service and support, to make sure a homeowner can get the best possible level of quality and value from the company and its equipment. Overall, fixing a garage door sensor problem usually isn’t difficult. But it can take time and require some troubleshooting. Homeowners who are dedicated to solving the issue and have a reliable company backing them up can quickly get back to using their garage door again.

LEDs are extremely energy efficient and consume up to 90% less power than incandescent bulbs. Since LEDs use only a fraction of the energy of an incandescent light bulb there is a dramatic decrease in power costs. The short of it is that you need an LED for displaying your garage door’s status, a switch that detects whether or not the door’s open, and enough materials to mount both in place. If you wanted to get fancy, you could add some sort of wireless system so you can have this switch in any part of the house as well, though the Instructables don’t cover that.

Be the first to start a conversation